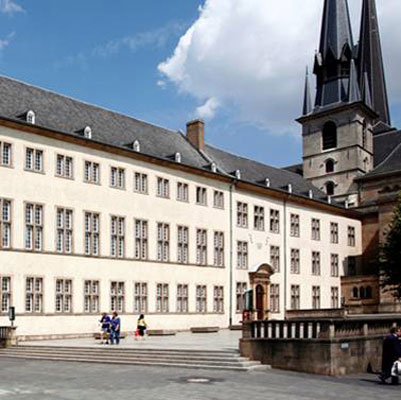 Tony Dutreux – A journey in the Orient

The beginnings of amateur photography in Luxembourg are somewhat uncertain. Apart from a few rare daguerreotypes, to our knowledge, the first photographs taken in Luxembourg date from the second half of the nineteenth century.
It was only in 1894 that the Circle of Luxembourg Amateur Photographers was formed. The Circle was represented at the 1900 World Fair in Paris by Tony Dutreux, and among others, the engineer Ernest Barblé and the architect Pierre Funck and was awarded a silver medal at this major international exhibition.
Jean-Pierre Auguste Antoine (Tony) Dutreux, son of Auguste Dutreux, receveur general and Elisabeth (Lily) Pescatore was born on 3 May 1838 in Luxembourg. In 1859 he was awarded an Engineering degree from the prestigious Ecole Centrale des Arts et Manufactures de Paris and subsequently drew the architectural plans of the Fondation Pescatore, built with the help of the bequest of his great uncle Jean-Pierre Pescatore.
In January 1867, at the age of 28, Tony Dutreux embarked on his trip to the Orient, visiting Egypt and Palestine.
The handwritten letters of Tony Dutreux were left to the Luxembourg National Library by his son. The photos for our exhibition come from the albums of this trip.
His traveling companion, Louis Tribert, is mentioned in the letters. The first letter is dated 18 January 1897, the last letters are dated in late April of the same year.  He was in Suez when the canal was being constructed and met Ferdinand de Lesseps, the projects leader. Owing to his engineering studies, Dutreux was very enthusiastic “ imagine the people and the equipment, there are workers from every country, -Bedouins, Greeks, Italians, Negroes, Germans-, who work from the banks of the canal dredging out the sand which is then removed in large wagons by train, others by camel.”
His trip was facilitated by his contacts “All the consuls bent over backwards to help me. My title, Secretary of the King of Holland for the affairs of the Grand Duchy of Luxembourg, which is vague and not well known also helped”
The letters contain many observations, often insightful. To make the trip across the Sinai peninsula, Dutreux and Tribert were accompanied by an entire team and a drogman (interpreter and guide) who negotiated the right to cross the dessert with the local sheiks. Often they encountered hostile Bedouins armed with guns. Dutreux comments “It is a trip that I would not recommend to anyone of a nervous disposition or unable to maintain his sang-froid. Any sign of fear or anger could result in an unpleasant overreaction in this part of the world.”
Photography is only mentioned once in his letters: when Tony Dutreux photographs Petra, Tribert comments “you could buy these photos in Paris” Dutreux replies “I have no intention to compete with them.”
During his trip, Dutreux is puzzled: “(…) this total absence of social distinctions is very noticeable when one arrives in the Mohametan world. Everyone is treated as equals from the lowly peasant up to the Pacha.”
In Jerusalem he deplores that “all these revered places are naturally the objects of incessant quarrels and mortal feuds between the different beliefs. I am convinced that if the Turks were not here to maintain order blood would flow far more often.”
Throughout the trip he reads the Bible and observed that  ” one understands it much better when one has seen the Orient. We can say that customs have not changed since Moses.”
In Damascus he met, thanks to Charles Hecquard, the son of the French consul, Abd-El -Kader: “I was very surprised to find him still a young man, having a beard as black as night. The emir is distinction and kindness personified. He received us into the interior of the Harem, which is a great honor. Politeness in this society is not to raise one’s eyes from the floor.“
(…) I have also seen another curiosity in Damascus through Mr. Hecquard. Mrs Digby, who was first married to Lord Ellenborough, remarried a Bedouin, Sheik Midjuel, who commands a tribe around Palmyra. Despite her unsuitable marriage, to every bone in her body, she is a lady.” In winter she lives in Damascus and in the summer she lives in a tent with her husband, dressed as a Bedouin.”
The success of his trip is captured in the following lines he wrote “today, all educated people who have the opportunity should visit the countries where the most important religious events have happened and which are the birthplace of our civilisation.”
The photos that Dutreux took during his trip show how the Middle East was perceived and understood by the Occident. They provide a valuable documentary evidence that goes beyond the text.
Tony Dutreux (1838-1933) held a seat in the Chambre des députés from 1881 to 1886, was Commissaire général du gouvernement luxembourgeois at the Universal Exhibitions in Paris in 1867, 1878, 1889 and 1900. He was also actively involved in the economic and industrial life of Luxembourg
Louis Tribert (1819-1899) was one of the 116 permanent senators of the Troisième République from 1875 to 1899.
Ferdinand-Marie, Vicomte De Lesseps (1805-1894) French diplomat, built the Suez Canal in Egypt (1859–1869).
Abd-El-Kader (1808-1883): philosopher and Algerian politician, founder of Algeria and principal opponent to the French occupation during the 1830’s. Imprisoned in 1847 then freed by Napoleon III in 1852. He returned to the Middle East to end his days. A man of dialog and tolerance, he stood in Damascus in 1860, in front of Muslims who wanted to massacre the Christians of Syria: he would save thousands of lives.
Jane Digby (1807-1881) is the great-great aunt of Pamela Digby Harriman (1920-1997), who had an unsettled private life, divorced from the son of Winston Churchill and appointed US Ambassador to France by Bill Clinton in 1993.