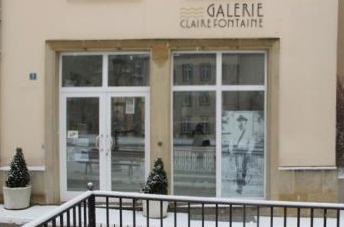 These photographs are inspired by the famous set of woodcuts Thirty-six Views of Mount Fuji Katsushika Hokusai produced between 1830 and 1832.
Despite the wide variety of shown scenes, most of Hokusai’s colour prints share a common structure. In the foreground people are going about their daily business, the middle ground refers to a different time-scale like seasons or things decaying, and finally a glimpse of mount Fuji hints at changes too slow to be perceived during a human life.
Hokusai’s woodcuts are part of a genre called ukiyo-e, which means ‘images from a floating world’, floating both in time and in space. They are clearly composed in different layers, letting Mount Fuji hover above or next to the world of humans. Often civilisation intrudes graphically into Fuji’s sacred space. Trees or posts cut into the mountain’s silhouette, house roofs and other constructions imitate its triangular profile.
Hokusai’s prints share several elements with photographs: they represent fleeting moments, they create a memory of simple events and people’s relationship with time is a major subject in the images. Just as photographs the prints are mechanically reproducible and they were affordable and not considered high-brow art.
This series is about time, about moments, seasons, years, lifetimes.

A true treat for the eyes is currently on view at the Clairefontaine gallery in Luxembourg: still life photographs from concentration and inner peace, which are printed with precious platinum palladium on a high quality Gampi paper.
Ryuji Taira is a quiet observer, he loves nature and loneliness. He explains that, during hikes, faded plants or dead insects often fascinate him. An ephemeral nature expressed through them inspires the artist to seek a new beginning. He wants to immortalize the fragile beauty of these creations on platinum palladium prints. Giving an eternal character to their lives, their aesthetic appearance between life and death. Even dandelion clocks, which are poised to be blown away by the next blast of wind, are worth being worked carefully, crafted on an excellent quality paper with the best metal, and be turned into a piece of art for everlasting preservation and contemplation.