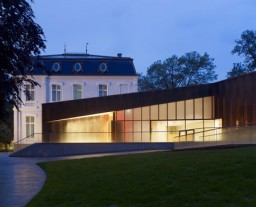 Johne’s works playfully act on the accustomed manner of representation and readability. By combining takings of spheric simplicity with sober and reportlike narratives he implements fictional elements in his works, taking their meaning beyond the purely documentary. He hereby generates space for associations that are quintessential in fulfilling his aim: creating metaphors of being and conceiving alternative myths in times when global change and its impacts are penetrating the life of every individual. […] The discrepancy between facts and their conveyance is a pivotal aspect of Johne’s work, and it manifests itself also in the 37 pieces of his Griechenland-Zyklus (Greece cycle). The sequence of pictures shows the star-spattered sky over such places as Delphi, Olympia and Santorini. The artist took them during his visit to this country, which appears to many to be the scapegoat of the Euro crisis. The comments below resemble excerpts of a travelogue. Or are they reports from locals? As so often in Johne’s oeuvres, the fictional element comes into effect and “the boundaries between individual case and society in total, document and prediction become blurred.” >[Extract from the exhibition text: Sven Johne: Der Weg nach Eldorado, Klemm’s, Berlin 2013].

Within the framework of the European Month of Photography (EMOP), Villa Vauban is presenting an extract from the Greece cycle and, in so doing, is once again consciously entering into a dialogue between old and new art, between past and present. At the same time, on display until 15 April 2018 in the older building of the museum are 44 photographs by Edward Steichen (1879-1973), which are the portfolio held by the photographic library of the City of Luxembourg. The exhibition is showing this ensemble together with selected paintings and sculptures from the late 19th century to the 1940s by Luxembourg contemporaries of the photographer. While Edward Steichen belonged to the generation of artists who aimed to elevate to the rank of a fully fledged art a photography in its early stages, which had been dismissed as being merely a form of record, documentation in photography and its linking with texts, information, narratives and history play a central role in the photography of Sven Johne. In his works, he systematically addresses the relationship between what can be experienced and learnt and what can be shown and conveyed about it. In the process, it becomes clear that documentary photographs are not exclusively an element of the visible, but that they are dependent on the word and knowledge.