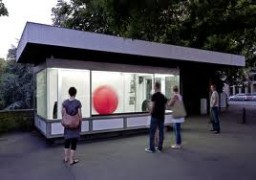 illumination Is the new interior sensation

Laurianne Bixhain, born in 1987, artist and photographer. She lives and works in Luxembourg and Leipzig. During the fifth edition of the European Month of Photography, she will show her works at the new Kiosk of International Art Critics Association Luxembourg. This new space, characterised by its white plastic appeal, finds itself on the intersection of the Place de Bruxelles, both central and isolated, because its removal from the usual museal context. A situation, which in itself perfectly matches the approach of the artist, who works on objects, places, shapes and materials by placing them in a certain ambiguity, due to the framing, composition or image processing.
As a result of her research trip to Chicago as well as her residence in Istanbul, she proposes an installation from her photographies – a collection and abstract amalgam of observations all together, offering shapes, colors, light intensities and materials coming from concrete objects. The observer has the freedom to form links, to redefine and create a dramaturgy of his own. The project for the Kiosk will show the mastered delicacy with which the artist herself observes and plays with her surroundings. Through a filter of a certain poetry, she keeps the original objects in a certain construction. We discover elements not in their existing form but through the effect they produce, isolated or in relation to each other.
The installation will also include a photography by Carole Melchior. Her trip to Chicago was supported by the National Audiovisual Centre, and her residency in Istanbul by the Ministry of Culture of Luxembourg. The production is supported by the AICA.