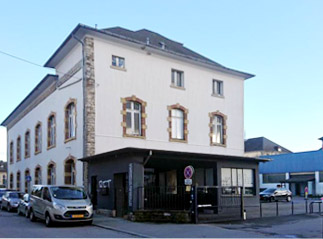 The LUCA Foundation welcomes the six artist-photographers who invite us to discover the urban and architectural space according to their different photographic approaches and practices.
Marked by history, the traces left by time, nature and their inhabitants, the buildings built by humans for humans are the reflections of a society. They attest to a way of thinking and living in the world, while disclosing the behaviors of a community. These samples from the real world form an “état des lieux”, and encourage us to question, analyse and interpret them. They thereby become revealing clues to a world that is opening up to us: that of humans and their environment.
Sébastien Cuvelier‘s Eunma Town tells the story of the successive dreams of an entire country, South Korea, seen through the prism of a large symbolic complex built in 1979, just before the Korean economic renewal.
The New Towns photographed by Raoul Ries were planned and built after the Second World War to relocate British populations who lost their homes.This photo series explores the evolution over the decades of the first wave of New Towns, designed and built between 1946 and 1961 in a one-hour radius around London.
Serge Ecker’s work illustrates the fact that architecture is for humans by humans, and the ruins are the remains of this human-made architecture and infrastructure. Ruins are defined and generated by absence of humans and function of the constructions from which they result.
In spring 2013, Eric Chenal discovered the Wolfers house, a private commission realised in Ixelles in 1929-30 by Henry Van de Velde and occupied since 1977 by the radiologist and conceptual art collector Herman Daled. Several visits followed to be able to present dialogues tied to this singular residence and images that “start” from the past.
Andrés Lejona highlights buildings that stand out from the ordinary. The illustrated architectures are not always beautiful or grandiose, but surprise through their originality and usefulness. These buildings have a surprising, somewhat ironic and sometimes surrealist side.
The work of Daniel Wagener balances between graphic design, staging and urbanism. Through his photographs, he sheds light on objects and urban landscapes that are both familiar to him and that let him transgress by taking isolated captures of reality. He thereby documents traces accidentally left by humans and the absurd normality of the staging of everyday life.