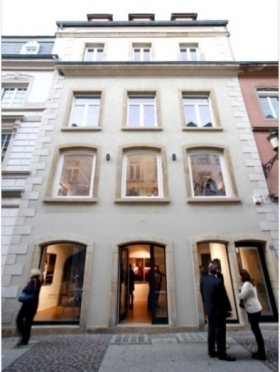 Instead of dealing in reassuring images and their illusory consolations, Cédric Delsaux prefers to reveal the poisonous beauty of darkness, hidden in our imagination as much as in our daily life. Whether he speaks about industrial excesses, delusions of grandeur or uncertain dreams, he elaborates the catalogue raisonné of our rational madness using singular devices to combine false reality and true fiction.
Inspired by cinema and literature, his work combines, in equal parts, the extraordinary and the banal, the fantastic and the down to earth to highlight the fictional power of images and the phantasmatic potential of reality. The series Nous resterons sur terre (2006-2008) portrays both a universal and subjective panorama of relationship between man and nature in the post-modern era. In addition there is also Dark Lens (2004-), a photographic suite of urban “non-places” inhabited by the heroes of the Star Wars saga, which has had a worldwide success. In the series Zone de Repli (2011-2014), Cédric Delsaux is interested in the case of Jean-Claude Romand, an unemployed father who, after pretending for eighteen years to be a medical doctor and researcher, murdered his entire family in 1993 when he was about to be exposed. The alternation of blurry visions and very precise details makes palpable the endless monotonous shiftings of the impostor, creating a claustrophobic universe where everyone can project their own fears, feelings or explanations.

During the European month of photography, Wild Project Gallery is eager to present one of the last series of Cédric Delsaux under the exhibition title Dark Celebration. The Series Underground Society (2013-2015) continues his exploration of recurring anxieties of humanity by plunging places and figures in a troubling obscurity. Shipwrecked and abandoned to their fate, the survivors of the Underground Society unveil current fears and obsessions  made up of apocalyptic visions where catastrophes, tragedies and breakdowns follow each other without respite. But, after all, it could be that the Underground Society is perhaps only a feeling, an elusive state of mute astonishment and suffocation, a latent presence about to break out or a distant fear as ancient as the end of the world that we were promised for soon, but is still late to come.